My novel Truestory, published in 2015 by Sandstone Press was inspired by my experiences raising my daughter, Nina, who is autistic. Nina and I campaign for increased acceptance of autism. We have done events talking about books, writing and ‘life with autism’ in Edinburgh Central Library, Kilmarnock’s Dick Institute, Waterstones on Princes Street, the Scottish Parliament. We also had a slot at Flint & Pitch’s Scottish Mental Health Festival ‘Beginnings’ in 2018.

I was involved in gathering the experiences of autistic people for the Midlothian Autism Strategy, and my piece ‘Two Trumpets’ was published in 2017 as the introduction to the strategy.

'The work we do raising acceptance of autism was featured in the Daily Record.' http://www.dailyrecord.co.uk/news/scottish-news/daughter-autism-found-voice-after-11550953

I have had short stories published in various anthologies, publications, & on platforms including:

‘The Pier’ published in Landfall by the Federation of Writers (Scotland), 2017. ‘The Pier’ also won Tyne & Esk ‘Writer of the Year Award’, 2013, judged by Zoe Strachan & Christine de Luca.

‘Going into Battle with a Kenwood Mixer’, published as part of ‘Nourish’ project by Scottish Book Trust, 2017.

‘We Know Something You Don’t Know’, published as part of Scottish Book Trust’s ‘Secrets and Confessions’ project, 2016.

‘Cock-eyed’ published in The Hotel by Appletree Writers Press, 2015, and winner of the CoastWord Festival Short Story Competition.

‘The Little Golden Apple with the tiny Golden Bite’ shortlisted for the Fiction Desk Newcomer Award, 2015.

I was CoastWord Festival ‘Writer in Residence’ in 2016 and the poetry I wrote inspired by the residency, Mrs Carlyle had Many Lovers, was published as a pamphlet by CoastWord Press. 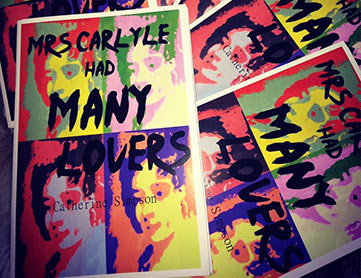 I mentored two young people as part of Scottish Book Trust’s ‘What’s Your Story’ project in 2016.

I ran a week-long memoir-writing course at Garsdale Retreat in the Yorkshire Dales.

I have been after dinner speaker at a ‘Ladies Lunch’ and at an opening ceremony for McCarthy & Stone.

I was Coastword Festival Writer in Residence 2016/17.

In 2016 was awarded a Hawthornden Fellowship.

I received a Scottish Book Trust New Writers Award in 2013.